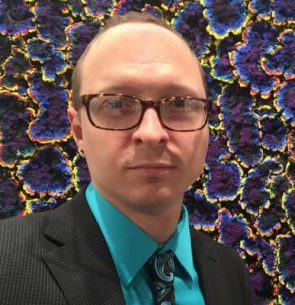 Matthew Mosher, a Boston native, is an intermedia artist, research professor, and Fulbright Scholar who creates embodied experiential systems. His work explores the intersections of fine art, computer programming, and critical making resulting in immersive installations, interactive sculptures, post-participatory data visualizations, and dynamic performances. His projects have engaged themes of meditation, gun violence, digital isolation, and tangible memory. Mosher creates conduits between digital technology and material forms to highlight our complex relationships with machines and each other. Doing so empowers participants in his work to see the world from a new perspective while reexamine their role in society.

Mosher is currently an Assistant Professor of Games and Interactive Media at the University of Central Florida. He received his BFA in Furniture Design from the Rhode Island School of Design in 2006 and his MFA in Intermedia from Arizona State University in 2012. In his more than 15 years working as an intermedia artist Mosher has exhibited at numerous international venues for contemporary art, including the International Symposium for Electronic Art and the Electronic Literature Organization. His research is published in the Computer-Human Interaction, Tangible Embodied Interaction, and New Interfaces for Musical Expression conference proceedings, and reviewed in Wired and Interactions magazines.