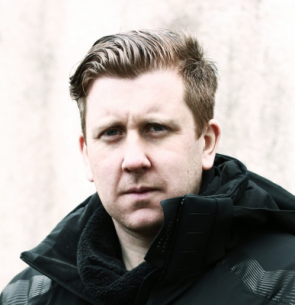 Niall Campion is the founder & Managing Director of VRAI. Nialls background is as an award winning editor, director and visual effects artist working in the film and television industry. Over a 15 year career he worked on projects for the BBC, Disney, Netflix, RTE and many more. Niall specialises in technological innovation to tell stories in a more interesting engaging way.

In VRAI, Niall produced and directed the VR Improvised Explosive Device awareness experience for the UN Mine Action Service (UNMAS) in Somalia. This project involved 2 trips to Mogadishu to capture authentic elements required to build the virtual experience. He was project lead on VRAIs IAG Cargo Virtual Reality Experience and is currently leading the iDAS project in collaboration with the Royal Air Force and Dstl in the UK. This project aims to codify airmanship behaviour using data driven virtual reality.

Niall also has a passion for sustainable business and has played a key role in implementing the Triple Bottom Line accountancy framework in VRAI. The company measures its success not just by annual profit and increasing shareholder value, but also by it’s impact on people and planet. VRAI recently were recognised for their work in this area by being named as Ireland’s Most Sustainable Startup at the National Startup Awards.